Lately I’ve been working to deploy a suite of PHP microservices using Docker containers. One of the problems is that our PHP applications are set up to work with PHP-FPM and Nginx (instead of the admittedly simpler Apache/PHP setup covered here), so each PHP microservice needs two containers (and by extension, two Docker images): a PHP-FPM container and an NGinx container.

The app runs over half a dozen services, so if you multiply that out, it will be 30 or so containers between dev and prod. Rather than build unique NGinx images for each one, I decided to build a single NGinx Docker image that would take the PHP-FPM host name as an environmental variable and run a unique configuration file with it. 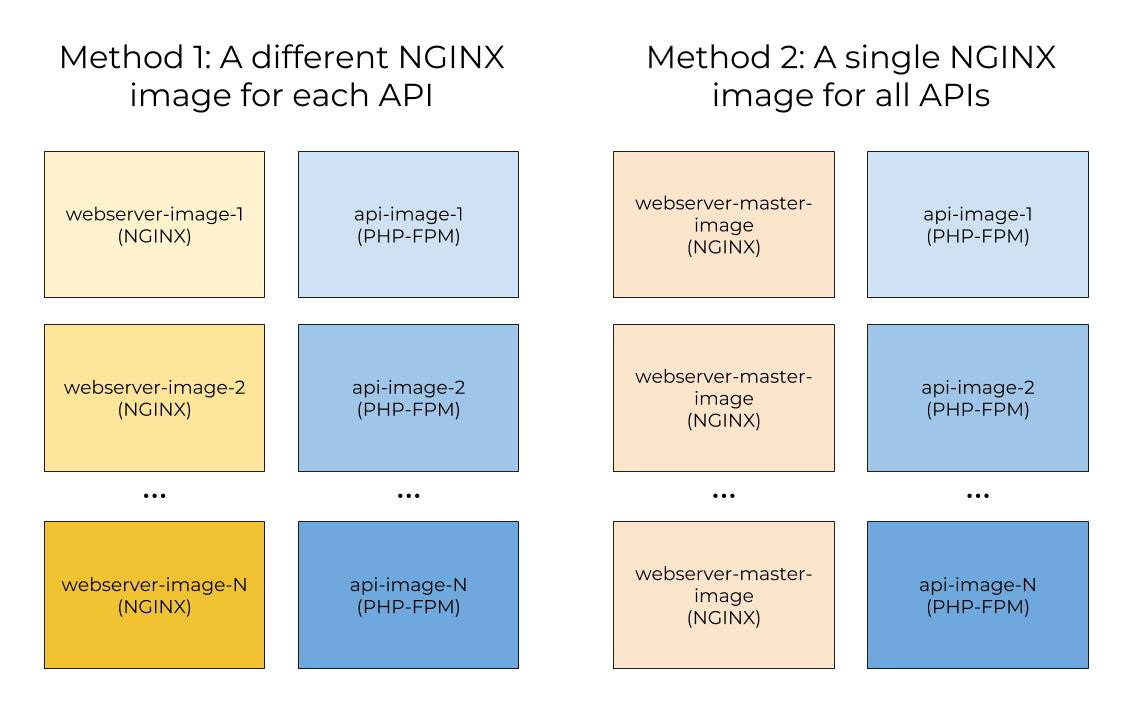 In this blog post, I’ll outline my journey for going from Method 1 to Method 2 above, and finally end it with the solution I came to using a new custom Docker image. I’ve made this image open source, so if this is a problem you’re familiar with, feel free to check that out.

Using NGinx with PHP-FPM can yield better performance for PHP apps, but the downside is that the PHP-FPM Docker image isn’t bundled with NGinx by default like the PHP Apache image is. If you want to connect an NGinx container to a PHP-FPM backend, you need to add the DNS record for that backend into your NGinx config. For example, if the PHP-FPM container were running as a container named php-fpm-api, then your NGinx configuration file should have this in it:

Hard-writing the name of the container into your NGinx config is fine if you’re only serving a single NGinx container, but as I mentioned above, we need to run several NGinx containers - one for each of our PHP services. Creating a new NGinx image (that we later have to maintain and upgrade) would be a pain, and even managing a bunch of different volumes seemed like a lot of work for changing a single variable name.

Initially, I thought this would be easy. There’s a great little section about how to do this using envsubst in the Docker docs, but unfortunately, this didn’t work for my NGinx config file:

My vhosts.conf file takes advantage of several built in NGinx variables, so when I ran the Docker command outlined in the docs (/bin/bash -c "envsubst < /etc/nginx/conf.d/mysite.template > /etc/nginx/conf.d/default.conf && nginx -g 'daemon off;'"), I got errors complaining that $uri and $fastcgi_script_name weren’t defined. These variables are normally passed in by NGinx, so I couldn’t easily figure out what they were and pass them in myself, plus that would make my container less dynamic.

Another Docker image to the rescue…almost

Next, I went searching for a different NGinx base image. Two came up, but neither had been updated in a couple years. I started with martin/nginx, and tried to see if I could get a prototype working.

Martin’s image is a little bit unconventional because it requires a specific folder structure. In the root, I added a Dockerfile:

Next, I added an app/ directory that was empty and a conf/ directory with a single file called vhosts.conf:

This is pretty much the same as my original configuration file with this one line changed: fastcgi_pass $ENV{"NGINX_HOST"}:9000;. Now when I wanted to start an NGinx container with a PHP container named php-fpm-api, I could build a new image and run it with an environmental variable:

It worked! But, two things bothered me about this method:

I figured Martin’s image would be a good place to start for a custom solution, so I forked the project and built a new NGinx base image that fixes the two issues. Now, if you want to run a dynamically-named backend with an NGinx container, you can simply do this:

If you want to customize the image by adding your own files or NGinx configuration files, then just extend it with a Dockerfile:

Now all my PHP-FPM containers use their own instance of a single Docker image, making my life much easier when it comes time to upgrade NGinx, change permissions, or tweak something.

All the code is available on Github, so if you see any problems or want to suggest improvements, feel free to create an issue. If you have questions with this or anything else Docker-related find me on Twitter to continue the conversation.